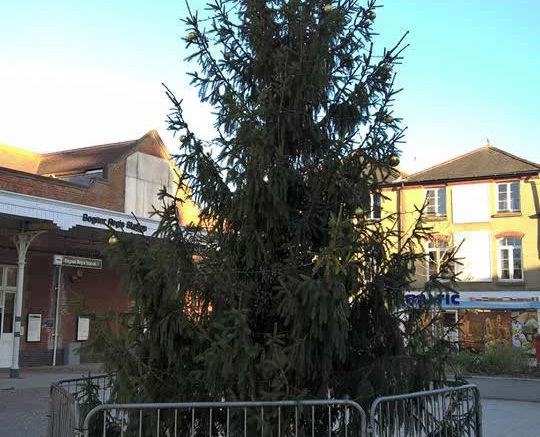 A lop-sided Christmas tree isn’t raising much festive cheer since it was erected near Bognor Regis railway station.

The town’s tree, which is said to be sponsored by the Picturedrome Cinema, has been met with a very frosty reception with observers claiming the rather uninspiring effort is “wonky and pathetic” and lacks proper decoration.

It is said that representations have been made to the contractors responsible for the tree and that they are due to return to address concerns raised.

Townsfolk have been having their say on social media. Fraser Pake said the tree was a

“laughable attempt to spread some Xmas cheer in the town! A handful of decorations and a few lights doesn’t constitute ‘decorating’.”

“Obviously the budget must be tight so the council Xmas party will be cancelled this year? And they’ll not be carrying out any further, pointless resurfacing projects? Or erecting anymore hideous structures in the town centre? I reckon we need to see some transparency and justification in the allocation of the budget as this is well past a joke now!”

What do you think?