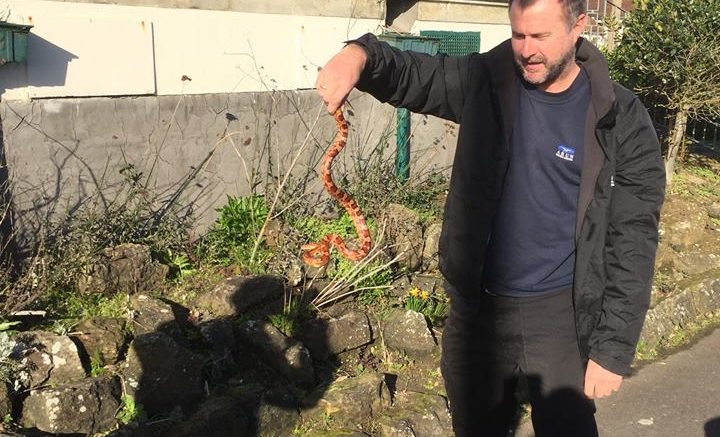 Snakes alive! A council worker got more than he bargained for when he found a snake slithering around in Marine Park Gardens in Bognor Regis this morning.

But there was no panic in the park when the hissing creature was captured, as it turned out to be a harmless corn snake (fang god for that!)*.

An expert said: “They are both harmless and non-destructive, unlike the cute little rodents everyone loves, like squirrels, mice, etc. They are also fantastic pest control. You want them around, they eat those destructive rodents.

“If one bites you, calm down, wash it off, and forget about it. Their bite is more scary than dangerous; a puppy or kitten does more damage when they bite.

“But they won’t bite you unless you try to pick them up or corner them and poke at them with a stick. So leave them alone and let them do their job they’re making your life better.”

Now Arun District Council chiefs are trying to track down anyone is missing a snake, kept as a pet. They have taken to Facebook to lunch the appeal, which reads: “Are you missing a snake? Corn Snake found at Marine Park Gardens. If you are missing your pet snake, or know of someone who has lost one, let us know either by sending us a message at Arun Parks and Greenspaces or emailing public.relations@arun.gov.uk.”