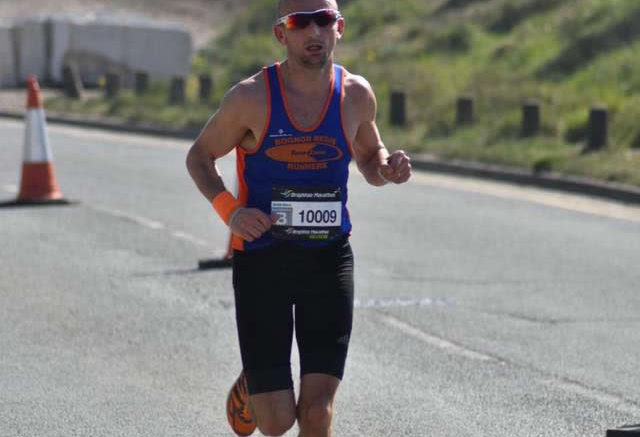 Bognor runner Simon Gill proved to be a marathon marvel with a fantastic finishing time at yesterday’s sun-kissed Brighton Marathon.

Bognor Tone Zone member Simon joined 12,000 runners in the eight annual event along the coast — and did so on the hottest day of the year so far.

Householders lined the streets of the course armed with hoses spouting cold, refreshing water to help competitors stave off the effects of the heat, with temperatures reaching 20C.

Simon was the first Tone Zone runner to come home and did so in an impressive 10th position in a time of 2hr39min in front of  more than 150,000 well-wishers who lined the streets to cheer on competitors. Pictured below are two other Tone Zone runners, Grace Natoli, left, and Andy Miles. 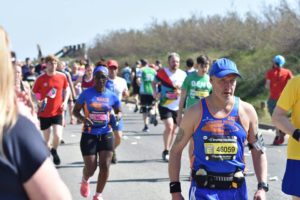 And there was a slice of history on the day with Stuart Hawkes becoming the first British winner of the race with a finishing time of 2hr27min, 36sec.

The race started from Preston Park with Brighton boss Chris Hughton on hand to officially start the event setting the runners on their way.

And there were plenty of supporters cheering on the Tone Zone runners, a fact not lost on coach Colin Hiscock. He said: “I’d like to say a massive thank you to all the supporters at Brighton. It’s not much fun standing around for hours waiting for runners but it’s massively appreciated. It really does make a massive difference to morale.”

Competing in his first marathon was Jack Penfold, 20. He started strongly but hit the dreaded wall at 20 miles as the energy-sapping heat took effect on the youngster, after slowing for three miles he was spurred on by his fellow club members at the side of the road and dug deep to run the final three miles to finish in 3.27.
Sy Daymond, Christopher Dummer and Jess Thomson were also competing in their first marathons. Daymond and Dummer ran well to finish in 3.25 and 3.44. Jess finished slightly after them in 4.04 after also being effected in the last quarter by the severe heat. 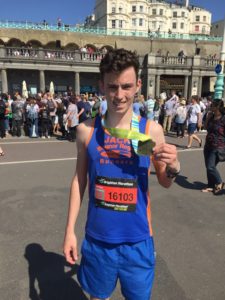 Other marathon debutantes were Daryl Fairbrother and Michelle Miles in 4.18 and 5.47. Two runners amazingly achieved PBs, Colin Hiscock in 3.27 and Wells in 5.48.