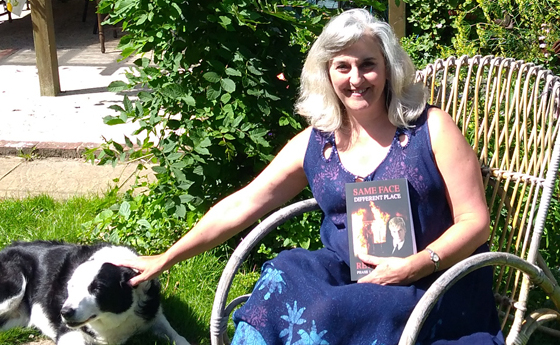 Author Helen Christmas has seen her lifelong passion for writing reach a milestone with the conclusion of her romantic thriller series, Same Face Different Place.

Delighted Helen, from Bognor Regis, said: “I have always enjoyed gripping stories with powerful characters, my favourite authors being Leslie Pearse and Ken Follet, who have written some brilliant books. I published my debut novel, ‘Beginnings’, in 2012, but never imagined it would evolve into a huge series.”

Set in 1970s London, the first book is the combination of a gangland thriller and a love story but at the heart of the saga is suspense; a murder mystery which slowly unravels over four decades.

The series, billed as being “quintessentially British”, is characterised by the various different decades, packed with music, TV, fashion and newsworthy events from each era. These are the things Helen says she recalls from her own life, from the industrial strikes of the 70s to the Thatcher years of the 80s and beyond.

Helen says there were only actually meant to be four books in the series but the final novel ended up considerably larger than planned, which prompted the author to divide it into two books. Retribution Phase 1 was released earlier this year in May. Helen has since been working hard to polish up the grande finale of the series, Retribution End Game. A paperback version will follow shortly.

Helen is also planning to organise a book launch in September; hopefully in Bognor with other local authors, who have also launched new books this year.

The whole series is available on Amazon and has received favourable reviews. Helen says she is thankful of the support of locals and her family members for her success as a writer. She has also had support from Sussex-based authors’ group CHINDI (Celebrating and Helping Indie Authors) of which she’s been an active member since 2014.

She added: “Writing is the fun part but the real hardship is in the marketing. This is where social media has been a Godsend as it enables to you to reach out to people you otherwise never would.”

Later this month CHINDI will be running a fundraising book stall throughout Arundel Festival, where you can purchase signed copies of the books.