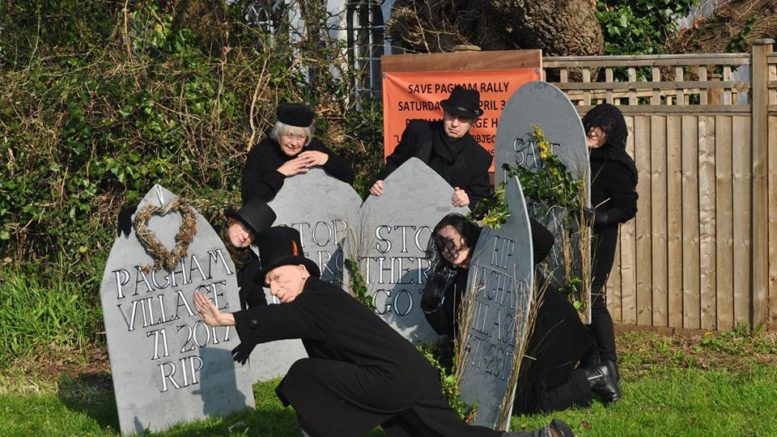 The death knell has been sounded on the historic village of Pagham. That’s the message campaigners dressed as mourners wanted to convey when they posed with “tombstones” yesterday as they drew attention to a protest over planned housing.

Members of Pagham & Aldwick Greenfields Action Movement are against Arun District Council’s so called Local Plan, which is set to see 800 new homes built on sites in Sefter Road and Hook Lane. There are also plans for 400 new homes to go up in Summer Lane.

So campaigners in the village to the west of Bognor Regis wore funereal black and displayed tombstones with the messages “RIP Pagham village 1471-2017” and “stop the rot”. A placard advertising a Save Pagham Rally at Pagham Village Hall on April 8 was also on show.

A Facebook page for the Pagham & Aldwick Greenfields Action Movement explained: “We are a community interest group and this group has been set up to keep people aware of the issues surrounding the proposed building of large numbers of dwellings on agricultural land in the parishes of Aldwick and Pagham in the District of Arun, West Sussex and to enable the promotion and exchange of ideas as to the best ways of preventing the re-zoning of this land.We are not in any way a pressure group,just concerned residents. 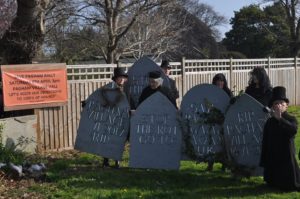 “Active involvement is essential if we are to be be successful in achieving this goal, so get involved, campaign as hard as you can, offer constructive ideas, counter government and builders arguments about the need to build regardless of the consequences and never concede that building on agricultural land is the way to alleviate the ‘supposed’ housing shortage!”