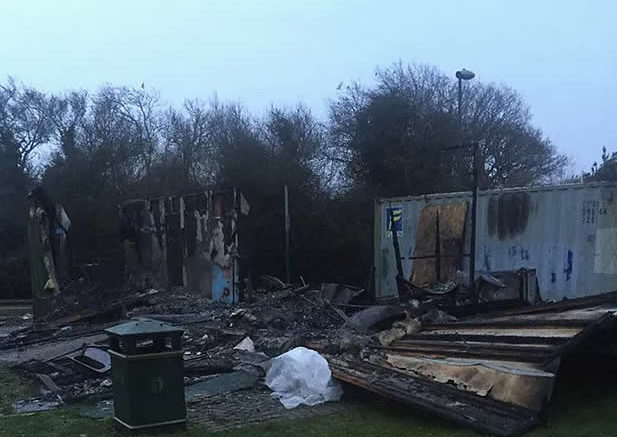 Arsonists struck twice last night in Bognor Regis leaving two buildings gutted. A blaze destroyed a kiosk near the boating lake in Hotham Park, while another fire ripped through the HQ of Aldwick Cricket Club in Hook Lane.

Now cricketers fear their club may never recover from the blow and that they will fail to find a way back from the devastating fire, which has destroyed valuable cricket gear.

He told So Bognor:

“We’ve been planning for a new build for over 5 years and today feels like we’re potentially as far away as we’ve ever been.”

“The fact we now have to find funds to replace all cricket equipment, fridges, tables, chairs etc, that was being put by for a possible new building means we will have to re-evaluate everything and see where we can go as being quite frank we were just about able to afford a down sized to keep us at the Felpham Oval. It’s a tough blow and this may lead to the end of the cricket club as we know it.”

“The initial support from the local community and from other cricket clubs has been nothing short of superb. Locals stopped this morning offering physical help, offering to set up donation pages and to do leaflet drops asking for help. It makes you feel proud to be a part of that community.”

“Through more hard work we will strive to ensure that we will be ready, in some guise, to take the field in our first games late April, but today has potentially knocked us back years and years.”