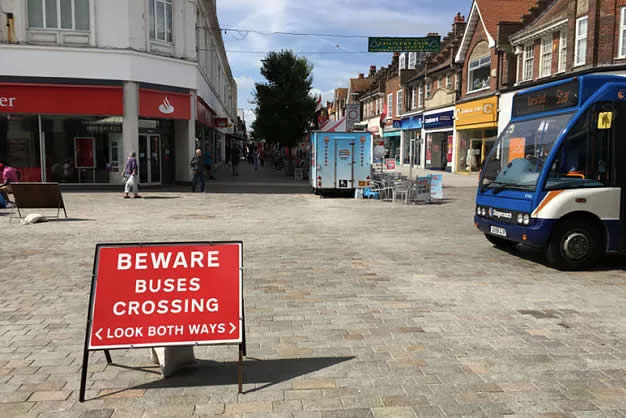 BOGNOR folk have labelled an area of pedestrianised road in the town centre a “death trap” and demanded that action is taken before someone is killed.

Buses still travel along the paved stretch of the High Street putting oblivious pedestrians at risk. The only thing that is in place to warn walkers are some signs alerting people to the fact that buses drive through the section.

So-Bognor observers watched in horror as, time after time, OAPs, parents with children and other folk inadvertently put their lives at risk by strolling over the road oblivious to traffic.

One mum-of-two, who we warned of the dangers and who asked to remain anonymous, said:

“This is absolutely horrendous. Buses must be re-routed, it is so bloody simple! Whoever is responsible for this madness should hold their head in shame. It can’t be long before some poor soul suffers serious injury or, God forbid, is killed. Why hasn’t action been taken?”

“As usual posturing councillors have been in the local mainstream press pointing out to the problems but where is the action? We need to protest.”

West Sussex County Council say pedestrians were the priority and buses should be stopping and giving way and the authority has pledged that a “full safety audit” will be completed.

Two months ago a spokesman for the council said: “There has been an on-going dialogue with bus operators about safety and it has been significantly noticeable in recent days that buses are driving much slower through the pedestrian area.

“Buses are now stopping for pedestrians when necessary, and approaching the zone with headlights and hazard lights on. Pedestrians are the priority in this shared space as they are the vulnerable user and the onus is on bus drivers to drive carefully.”