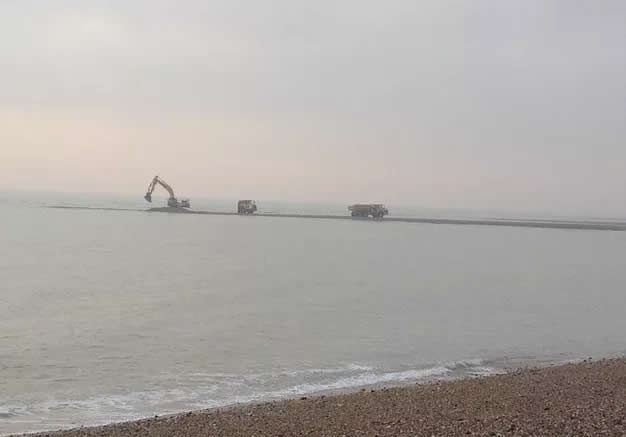 Pagham residents have reacted with caution after a report suggested scientists have warned that a tsunami could destroy much of southern Britain.

The beach at Pagham Harbour has been eroded during the past few years due to a growing spit and a tidal rush scouring the coastline.

Home owners on the foreshore have expressed their concerns for the safety of the properties and work has been underway for a good few years to try to solve the issue.

Our picture shows heavy plant removing sand from the beach yesterday morning as work continues to retain rectify the problem.

Today the Mirror reports that unstable volcanic land in La Palma, Canary Islands, could trigger an eruption and set off the natural disaster, scientists warn.

Research suggests a part of land the volume of the Isle of Man could break away from Britain and smash into the Atlantic Ocean.

This could result in a huge tsunami with waves up to three metres high, threatening to swallow coastal towns.

“Arun District council looks after our coastline, their remit is ‘adaptive management’ so until the damage is done they won’t do a thing… same old same old, reactive rather than proactive!”

The looming tsunami would travel faster than a jet aircraft, and would devastate much of southern Britain as well as the eastern seaboard of America.

Dr Simon Day, of University College London, says the country needed to prepare for the natural disaster which would wipe out whole towns and travel several miles inland.

“It could be several metres high, it depends where you are and how much energy the wave has,”

“If a tsunami of two or three metres hit the south west of England or Ireland you have a lot of tourists on beaches.”

While the scientific community is divided on the exact impact of La Palma’s collapse, Dr Day believes recent studies have proved him right, says the paper.

“There was a series of objections,. But independent modelling has shown the same things as me. My response is it is better to know so we can prepare.”