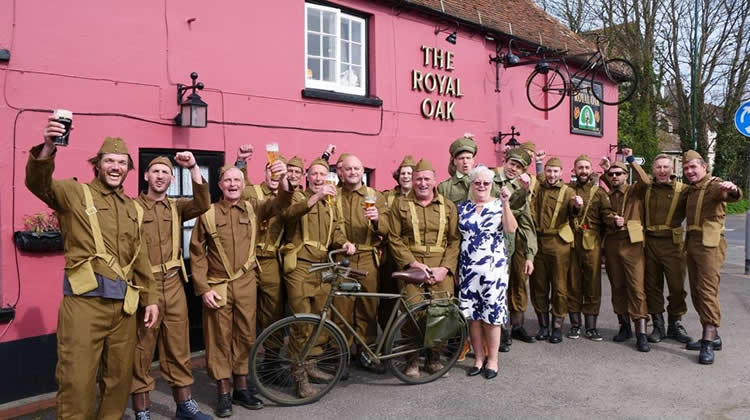 The proud wife of one of the Pink Pub to Pegasus Bridge pedallers has penned a poignant poem to mark the monumental charity bike ride.

Emma Long waved off her husband Ben and his fellow cyclists as they set off on their fund-raising mission and was then inspired to put her thoughts into verse.

The bikers, dressed in Home Guard outfits, are set to arrive at Pegasus Bridge today having completed the 150-mile trip to coincide with the 75th anniversary of D-Day. To date they have raised more than £100,000 for two charities. One beneficiary is All Call Signs (ACS), formed after the tragic loss of ex-SAS hero Danny Johnston, who sadly ended his own life. The other is Last Night A DJ Saved My Life (LNADJ) which creates fundraising events and initiatives for the electronic music industry to support children in crisis.

Bank worker Emma, mum to Bonnie, aged 10, and Hadley, aged 14, says the poem is dedicated to the cyclists and their logistics team but she also hopes it will help to keep the D-day story alive for future generations.

“I wrote the poem in the middle of the night and it comes from the heart. It has struck me that Ben and the boys can stand side by side with the heroes from D-Day but that this won’t be possible one day. We need to keep the story alive for the real heroes and not consign it to history. The amount of money raised is absolutely fantastic and it wouldn’t be possible without the Bognor public and their contributions and many others beside.”

Got out those trusty bikes and brushed them down.

Another mission was being planned

Which would lead them to historic sand.

Together you are one powerful, money-collecting fleet!

The general public and the sponsors we must thank

And when you come home don’t think for one minute you keep that rank!

You’ve all done your bit, giving

‘All call signs’ another profile lift

This amazing new charity will benefit from your amazing gift

To have Dan and Sj be part of your ‘bicycle ship’

Has helped create one momentous trip.

So, boys there is no doubt that today you will shed a tear

Standing side by side real heroes that were oh so brave

Feeling real gratitude for the freedom they gave.

You have shown once more that Bognor has a huge community heart, loving and generous to the core,

With the help of you lovely men

We are proud to say, you are our husbands, partners and those that we love

What you have done has been watched and admired – including those from above.

Lest we never forget

Written With love from the wife of private Ben x