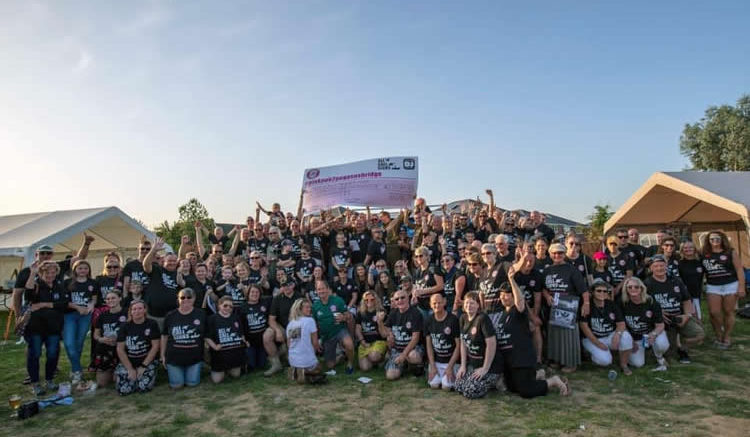 If there were ever any doubt that a great deal of community spirit would be restored to Bognor Regis it was surely banished with the startling and heartening news that the amount of money raised by charity cyclists has topped £132,000.

The 26 bikers, dressed in World War Two army uniforms, cycled on machines worth no more than £25 from the Royal Oak hostelry — far better known as the Pink Pub — to Pegasus Bridge last month.

The entire town and surrounding areas got behind the fund-raisers’ bid to head to France for the 75th D-Day commemorations as they boosted the coffers of two charities: All Call Signs, which aims to help forces’ veterans cope with issues such as PTSD, and Last Night A DJ Saved My Life, which is dedicated to creating fundraising events for the music industry to help children in crisis all over the world.

The event was organised by friends of Bognor man Danny Johnston, a soldier who served with the Princess of Wales’s Royal Regiment in both Afghanistan and Iraq. Sadly, he took his own life a year ago after struggling with depression caused by PTSD.

The final total “reveal” and cheque presentation took place at the pub last Saturday and the cyclists were hailed as the heroes they are as the community came together once more to celebrate their efforts. But before the richly-deserved fanfare there was a touching moment not known about until Viv Johnston, Danny’s Mum, took to social media. She told the group’s Facebook page:

“What they didn’t tell you is the boys arranged for 2 buglers to play the Last Post and lay 40 white roses at Danny’s grave just before we rode to the Pink pub on Saturday. An incredibly thoughtful gesture for my family and honouring Danny’s memory. Thank you, PP lads, for every single thing you have done.”

The charity cyclists are now said to be in line for recognition at the Pride of Britain awards after several backers said they had put them forward as potential recipients at the glitzy TV ceremony that celebrates all that is good about this country and its people.

Mother-of-three Colleen Rayner, co-owner of Bognor eatery Rick’s Cafe (with her husband Rick), said the bikers deserve nothing but total admiration for their efforts on the historic ride. She added:

“It’s a remarkable amount of money to raise and I think they should definitely feature in the Pride of Britain awards. They get my vote! The town of Bognor often gets stick but this has brought the community together to prove there is so much to like about the people who live here. A great effort, one which deserves so much praise.”