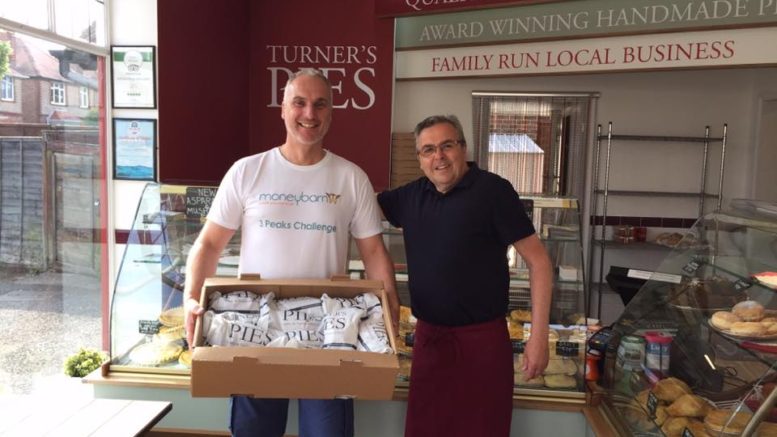 It was a case of ‘pie in the sky” for intrepid Bognor Regis hiker Chas Stubbings as he successfully completed the Three Peaks Challenge to raise £20,000 for charity.

For Chas and his team of mountain-climbing fund-raisers were fuelled on their trip by the mouth-watering snacks made by Turner’s Pies. Pip Turner, the elder statesman of the esteemed pie-makers, with shops in Bognor, Rustington and Chichester, was on hand to dish out the savoury goodies as the team set off.

Chas, who has been training for the gruelling event since January, achieved the goal along with colleagues from Moneybarn, a Petersfield firm who specialise in car finance. He said: “The team seriously loved those pies. We raised £20,000 including £6,000 matched funding from the company.”

And one of this fellow hikers, Alexandra Phipps, said: “I’ve achieved the hardest mental and physical challenge I have ever done, we did three peaks in 23 hours and 41 mins.

“Statistically 60 per cent fail and 12 people die a year from attempting to try to do it in under 24 hours…that puts it in context what we have achieved.”

The Moneybarn team took part in the challenge to raise money for The Rowan’s Hospice and Cancer Research UK.