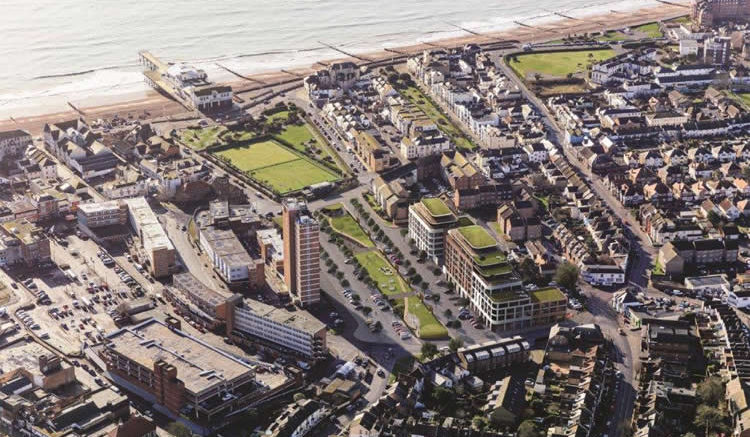 Once there were plans to transform the sunken gardens in Bognor Regis town centre into a futuristic Pavilion Park development that embraced new business premises, shops, more car park space and even a pedestrian path to the pier.

Now though plans would appear to be in tatters after members of Arun District Council’s cabinet decided to take another look at what plans are afoot for the future of the Hothampton site. The council says plans that are now put forward with residential developments won’t be considered and that the future of the nearby health centre won’t be affected.

The ruling comes after a change in who wields the power within the council — which has been brought about by the local elections back in May that saw the Liberal Democrats gain control of the council from the Conservatives.

Councillor James Walsh, who is the leader of Arun District Council, said the fresh look at the plans for the area’s redevelopment would focus on an intention to provide an attractive area to be enjoyed by residents and visitors by creating a real “asset to the town”. He added that consideration will be given to issues surrounding potential anti-social behaviour and that

“we will be looking to address this in the design process”.

And councillor Francis Oppler, who is the deputy leader of Arun District Council, explained that during the elections, a high level of objection was seen regards the previous plans for this area and he added

“we are determined to honour our pledges in the election by listening to local people”.

The majority of people of Bognor Regis who have shared their views on various social media platforms seem to approve that the U-turn has been made. Ian Nicholson, a plumbing and heating engineer from the town, said that a people’s vote should be used to determine the future of the area. He said:

“Put two or three viable options forward and let the people of Bognor and surrounding areas vote for their favourite.”

Andrew Clark suggest that all the submitted schemes, of which there are 17, should be put in one place for public viewing

“and then ask the people what they would like, either as a scheme in its entirety, or a mix of them”.

“Unfortunately there is a small contingent of predominantly LibDem councillors led by Francis Oppler that has voted against any development for Bognor Regis. I think the best way forward is for Bognor to decide, develop schemes on the back of the feedback and put it to a referendum of all the people in Greater Bognor.”

“Just update the one we have got. Why do we need a bigger one? Southampton is just a short way away then there is Chichester, Brighton or Worthing — why do we need what they have? We need activities that get us moving. Not sitting on our bums getting fat. We have lovely dining out places already we need things to do.”