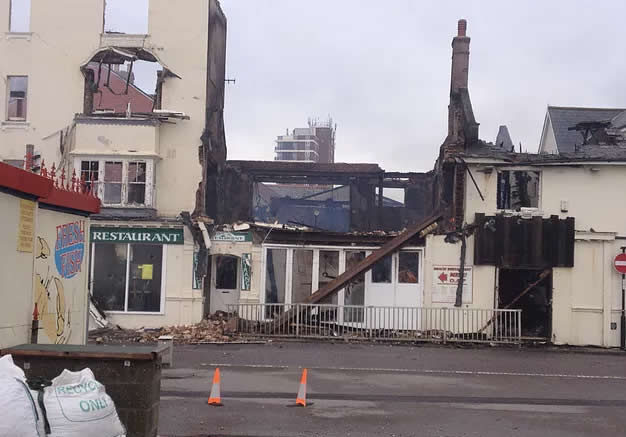 A HUGE inferno has ripped through a Bognor seafront venue — and continues to burn, fanned by strong gusts of wind.

The flames are from a gas mains which is burning out and experts were gearing up to deal with the existing fire at around 10.30am.

It means fire crews are still dealing with the blaze and have cordoned off the surround area. Police are also concerned about residents flocking to the scene to see for themselves the devastating aftermath.

West Sussex Fire and Rescue Service said 14 pumps were sent to tackle the blaze in the early hours, which is believed to have affected a derelict nightclub Kristianos, The Mud Club and Empire, on the prom.

“A huge part of the UK clubbing scene is lost right there, although closed years ago looks like a goodbye to Empire for good. “Hope no one was hurt and everyone got out safely.Also fair play to all the emergency services working to bring it under control in those weather conditions.”

The authorities believe the road along the seafront will be closed for a week in the aftermath of the blaze.