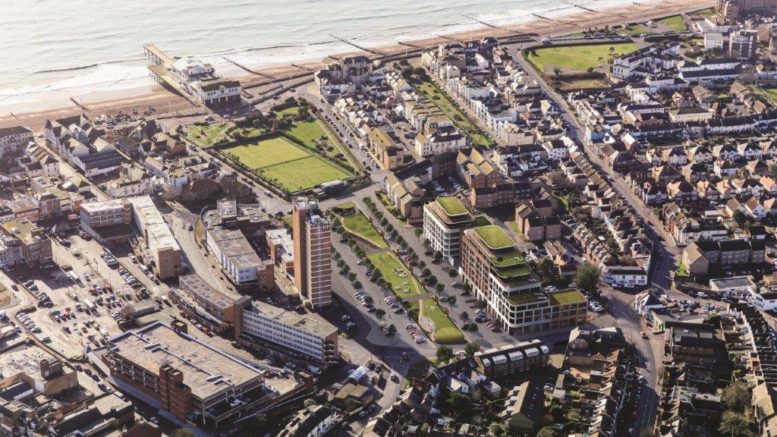 The transformation of the Hothamton car park into what is described as a “spectacular gardens-by-the-sea concept” is set to move a step closer.

Councillors attending Bognor Regis Regeneration sub-committee next Thursday are being asked to approve the delivery of the redevelopment, which is said to be “a key step in the progression of the plans from the drawing board into reality”.

The plans for both the Regis Centre and Hothamton sites were previously approved by Arun District Council in February 2017.

The plans for the Hothamton site include the new Linear Park, which creates a green link for pedestrians from the town to the pier, alongside residential accommodation and commercial premises such as cafes, offices or shops on the ground floor.

More than 400 people engaged with a recent public consultation on the draft designs for the new enlarged park. The designs include high-quality space for play, markets and events, with permanent kiosk-style business opportunities, as well as car parking. The feedback from the consultation has been reflected in some design changes to make the park more user-friendly.

The residential buildings could include student or staff accommodation as well as apartments for private sale or rent. The health authority has yet to decide whether or not the existing GP facility which is currently on this site will be relocated.

Councillor Phil Hitchins, chairman of Bognor Regis regeneration sub-committee, said: “This is an exciting day for those of us who have been involved in the town over many years. I am really looking forward to seeing the new park take shape as it will create an attractive green corridor from town to seafront.

“The quality of the design shines through, and the existing park area will be enlarged and transformed with new play and leisure facilities. Many of the features have been on the public’s wish list for the town such as the water play facility.”

Councillor Gillian Brown, cabinet member for economy and policy and leader of Arun District Council, said “I’m delighted that we now have firm plans to deliver this first phase of the project.

“The council’s high ambitions for Bognor Regis are clear in the aspirational quality and scope of the scheme which will transform this corner of the town. The park will transform the public space and the much-needed residential accommodation and business opportunities will attract people to the town.”