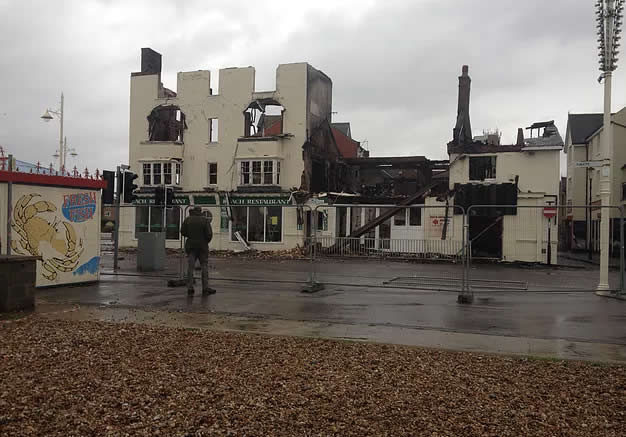 A BOGNOR Regis fire officer has lifted the lid on the remarkable effort from the emergency services in dealing with the fierce blaze that gutted a seafront building.

The blaze, fanned by strong gusts of wind from Storm Angus, destroyed the building which housed a tis and chip shop and formally was the venue for ` number of nightclubs.

Bognorian Ian Guppy, who works as a crew manager for East Sussex Fire and Rescue, took to Facebook to reveal just how testing the fire was on those charged with dealing with it.

“As mobilising officer it’s one of the biggest jobs I’ve ever been in charge of, but the teams from West Sussex and Hampshire along with us in the Sussex Control Centre assisted in what looks like a great job to protect the lives of local residents and preserve the surrounding buildings.”

“A tough incident in normal weather but almost impossible in those winds. It’s no wonder calls were being received from all over Bognor with the way the smoke was being driven for miles. Thank you to the police, ambulance, emergency management teams and all other agencies for their help and support.”

Some 14 fire engines tackled the fire opposite the prom near the pier on Sunday morning. Our picture shows the scene of devastation today (Monday).