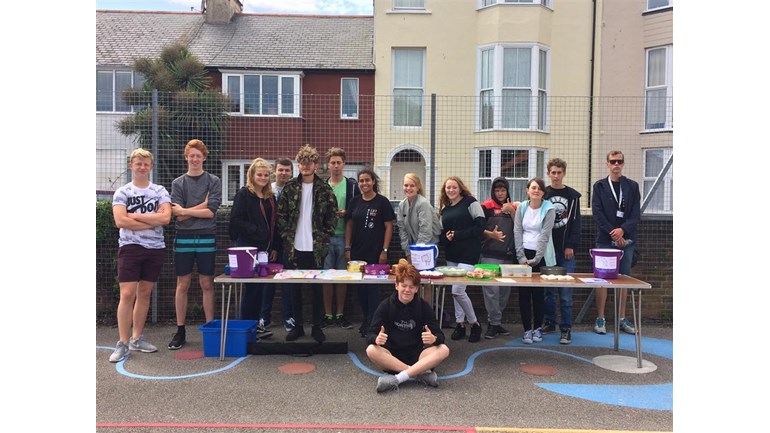 A group of Bognor teenagers tipped rice pudding, raw eggs, cold gravy and other food over each other’s heads in a “fear factor” bucket challenge in aid of Coastal West Sussex Mind.

They filmed the event, at the 39 Club, Bognor, last week and posted it on the West Sussex NCS facebook page.

The challenge was part of their National Citizenship Scheme (NCS) project. The group of 15 16-year-olds in NCS Wave 1, Team 2 felt passionately about raising awareness around mental health issues and so chose to raise money for local mental health charity Coastal West Sussex Mind who campaign to challenge stigma and discrimination.

The charity also provides support to people with mental health issues across the county and holds several drop-ins for older people in the Salvation Army Hall, Canada Grove, Bognor.

One of the young people, Jasmin Field, said: “We used baked beans, spaghetti hoops, chopped tomatoes, rice pudding, eggs, custard, flour and cold gravy. Before the bucket of food was poured over us, we read out some facts about mental health. We’re hoping that our film of it will really help raise awareness about mental health.”

Teenagers taking part in NCS spend five days on a residential adventure activity trip and a week staying at a university, developing team building and personal skills, before doing two weeks working on a community project of their choice.

Jasmin added: “Doing NCS has been amazing. The first week, on the residential was so good.”

Coastal West Sussex Mind is affiliated to national Mind but separate and independently funded so relies on local fundraising for some services. Anyone who would like to make a donation can go to www.justgiving.com/coastalws-mind.

Pedal power for Paul! Rugby stars get on their bikes to raise money for paralysed ex-Bognor ace Curtis

Shining star! How Nigel’s illuminated house has shed the festive spotlight on a worthy charity