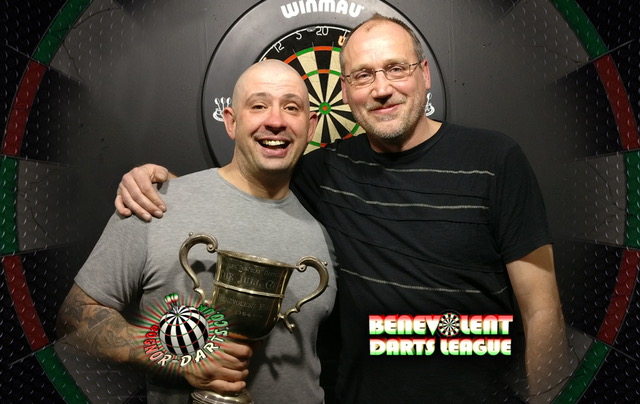 Rob Collins made it three and easy when he claimed his third Bognor Friday Night Benevolent Cup knockout trophy at Newtown Social Club.

Some 52 players took part, six fewer than last year, but still one of the best turnouts on record.

The first round saw a 180 from Alex Norgett (Newtown Amity) in his win over team mate Rob Tite. But the big surprise was the 3-time champion, Gary Blackwood (the Legends), being knocked out by Keith Robinson (Chichester Snooker Club) with a 2-0 win. Unfortunately for Robinson, his game fell below par in the second round, and he was taken out by Simon Mitchell (Newtown ‘C’).

The first quarter-final saw Ragless lose the first leg to Lewis Kalli (QE2 Galleon), but he composed himself to take the second, and with three tons on the trot in the third leg, the win was his. The second quarter-final was between the 2007/08 champion, Simon Edwards (Richmond ‘B’), and Norgett.

Edwards won the first leg, and Norgett took the second. But the experience from Edwards showed, and he took the place in the semi-finals. The third quarter-final pitched Collins against team mate Wayne Wadsworth (Friary ‘Z’).

Wadsworth had some luck earlier in the night, but it was not to be in this game, as Collins hit two 180’s in 2 legs, for a 2-0 win. The last quarter-final saw Owens up against Mitchell. With a 180 from Owens in the second leg, Mitchell was out of his depth and lost 2-0.

The first semi-final saw Ragless against Edwards. Ragless started with 140 & 125, but Edwards started with 100 and 136. With 76 left Ragless hit single 5, followed by treble 17, and finally double 10 for a 15 dart leg. Edwards started the second leg with 81, and followed with another 81, a ton and a 140. Ragless hit a ton and 95 but he was still behind. Edwards missed double top and double 10 for a 56 out-shot, then missed double 5 with 6 darts to allow Ragless to catch up. Ragless only took 2 darts to pinch the leg with a 60 out-shot, taking the place in the final.

The second semi-final was between Collins and Owens. Owens won the bullseye, but started slowly. Collins on the other hand started with 140, followed by scores of 81, 85 and 95. He then missed the double to take the leg, but Owens could only leave a chance.

He got that chance on his next throw, but missed, giving Collins another chance which he hit. The second leg saw Collins hit two tons on the trot, followed by 83 and 92, while Owens started with 98 & 100. Collins missed double 18 for the leg with 4 darts, but Owens couldn’t capitalise on his opponents misses, until Collins left himself with 9, giving Owens a shot at the leg which he got. The last leg saw a closer game with 96 & 100 from Collins, and 81 & 93 from Owens.

With 155 left Collins hit the treble 20 and treble 15, but the last dart missed the bullseye. Collins had another shot, but couldn’t hit the double. Owens failed to take command of the game, letting Collins back to hit the double, and the place in the final.

The final started with Ragless winning nearest the bull, and duly started with 123 followed by a 140. Collins started slowly, but eventually hit a ton followed by 125. Ragless failed to hit a 100 out-shot, giving Collins a chance at 85 which he hit to take the first leg in 18 darts. The second leg was close as well, with Collins hitting a ton, and Ragless hitting two tons.

Collins hit 98 to leave double top, and Ragless hit one of the tons to leave 49. Collins missed the double with the first dart, but used the other two to take the second leg in 21 darts. Leg 3 saw a slower game from Ragless, while Collins was steady, hitting a ton on his second throw. Collins hit 99 to leave 74, then Ragless hit a ton to leave 152. Collins went for the bull and hit 25, and after hitting another 25 then missed double 12.

He had another chance on his next throw but left 12. With 111 left, Ragless hit treble 20 and single 11, but the last dart was sitting the wrong side of double top. Collins then stepped up, and with his second dart hit double 6 to take the third leg, and his third  title.