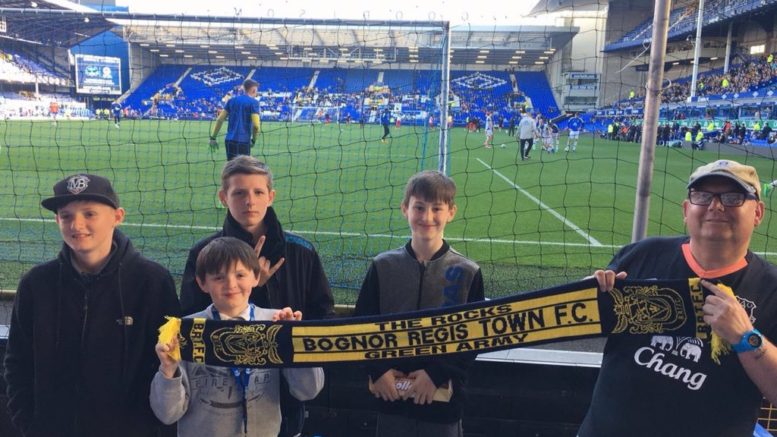 The Rocks are on their way to Wembley. Alas, not Nyewood Lane’s finest, who became the town’s heroes when they gained promotion at the end of a super season — rather, a well-travelled Bognor scarf worn with pride by perhaps the team’s most long-distance supporter.

For Tranmere Rovers and Everton supporter Fred Evans will be wearing Rocks colours when the goes to the national stadium on Sunday to cheer on the Whites when they come up against Forest Green Rovers for the right to gain a Vanarama National League play-off final promotion place into the football league.

Fred because hooked on Bognor when he came to a game against Folkestone, which Jamie Howell’s men won with a fantastic 7-1 scoreline, as he was enjoying a holiday in the town. Since then Rocks won promotion to National League South from the Ryman Premier, and Howell promptly quit the club to move to Eastbourne Borough. 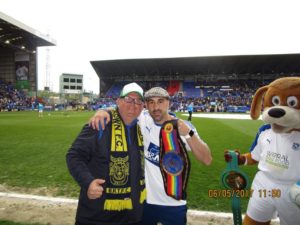 Following his new-found love of the Rocks, Fred has swamped social media site Twitter with images of his on his travels — along with his much-loved Bognor scarf. Some highlights from his snaps include a picture at Goodison Park, the home of Premier League side Everton, as well as one at the statue of Toffees legend Dixie Dean. 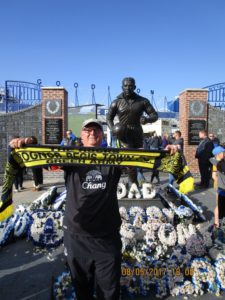 But there is one place Fred refuses to take his prized BRTFC possession — Anfield, the home of Everton’s Merseyside rivals Liverpool.

Fred said: “Whichever ground I go to the scarf goes too. I am proud to support the Rocks. The tour has taken in Everton, Tranmere and now Wembley for the National League play-off. The scarf goes everywhere…except Anfield!”