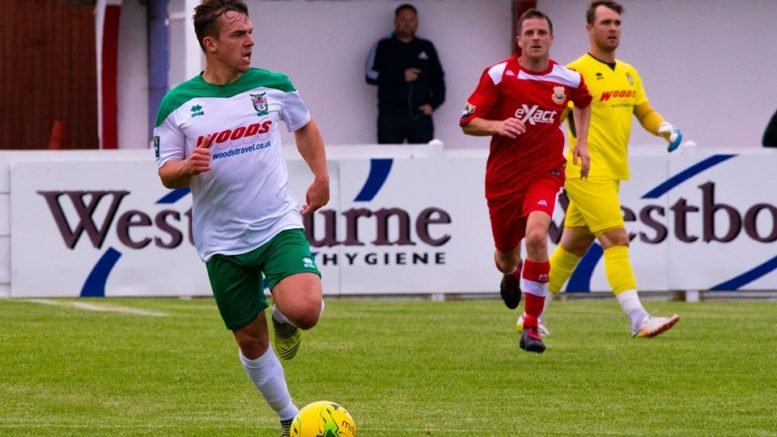 Highly-rated Pompey winger Jamal Lowe is serving as an inspiration to a crop of youngsters plying their trade in non-league football with dreams of making the grade in the league game.

That’s according to Bognor Regis Town defender Calvin Davies as he and his team-mates prepares to welcome a third Fratton Park youngster on loan at the Rocks.

Jackett has seen Lowe, 24, flourish under his tutelage since he joined the Blues from non-league Hampton & Richmond Borough, proving players who develop later than others still have a chance of playing league football. He signed a new deal at Pompey in January and helped them win League Two to gain promotion last term.

And while Davies is happy at Bognor under Pearce and No.2 Robbie Blake, he says Lowe’s journey is one which is inspiring to those who dream of fulfilling their ambition. He said: “Jamal Lowe at Pompey is a great example of what is possible. His story proves to younger players that they can still get their chance even between the ages of 17 and 25.”

Davies was at Pompey and was on loan at Bognor before signing on, and he says he chose to make the move because of the club’s reputation of playing the game on the deck.

He said: “I wanted to play men’s football and play it the right way, the passing game. I spoke to Chad Field and was influenced by what he said about the club and the way they played the game. He was also at Pompey before he came to Bognor. And Tommy Scutt was at Pompey as well so you can see there is a good association with the two clubs.

“Bradley and Dan have come to the club this season and they have been noticed for what they have done while at Bognor and now Joe has that opportunity, too. And they will all feel they have a point to prove.”

Davies says Blake, who left Pompey in the summer to take up a role as assistant manager at Bognor, works well with Pearce and has brought a sense of fun to proceedings.

Blake’s arrival came after the Rocks were demoted from the National League South after just one season in the higher division. He said: “I know Robbie from when I was at Pompey and I was excited when I learned he was coming to Bognor. He and Jack are a good combination. We are a relatively young side and we have a good bond and there are always plenty of jokes in training.”

Now Davies, who almost signed for Bristol City U23 a year ago and who had a short spell at Yeovil, says he happy to help Bognor try to maintain their unbeaten league campaign against the Angels. Bognor then host Folkestone Invicta on Tuesday.

He added: “We’re a young team and we don’t have any fear when we’re playing and that is essential. We’ve started well and hope to continue with that winning mentality after the disappointment of relegation last season.”

As for his aspiration of returning to league football, he said: “I’m not chasing it. if I can play well every week and help the cause that is all I can do, and I am happy to do that.”