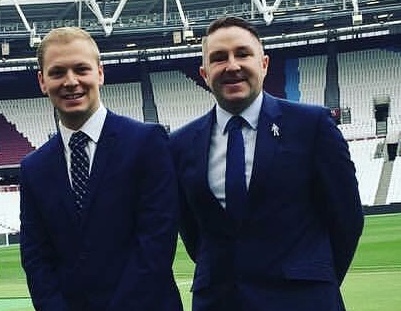 Teachers Dan Austin and Joe McIntosh hope Rocks fans can boost their charity fundraising efforts as they head in to Great South Run in Portsmouth on Sunday.

The duo, who will run as Team Southway Primary (partner school of Bognor Regis Town) plan to take the 10-miler in their stride as they look to swell the coffers of the Portsmouth Down Syndrome Association.

Tens of thousands of runners are gearing up to take part in this year’s run, taking on the tough route around the streets of Portsmouth. Held annually since 1990, the popular race is one of the biggest 10-mile runs in Europe, attracting runners of all ages and abilities to take part.

Portsmouth Down Syndrome Association provide specialist services and support to help children reach their full potential and have been inspired to pull on their trainers on behalf of one of my pupils from last year who still attends the school.

Bognor boss Jack Pearce is backing the pair all the way. He said: “It’s great to learn that Dan and Joe are making a fantastic contribution for a fantastic cause and as a club we fully support their efforts and hope lots of money can be raised.”

And Dan said: “We are running in this event to help raise money and awareness for this fantastic local charity. They do fantastic work across the south and support many children, including one super pupil we are lucky to teach.

“Donating through JustGiving is simple, fast and totally secure. Your details are safe with JustGiving – they’ll never sell them on or send unwanted emails. Once you donate, they’ll send your money directly to the charity. So it’s the most efficient way to donate – saving time and cutting costs for the charity.”

22-man brawl, four sent off as Pagham’s draw with Three Bridges is marred by violence