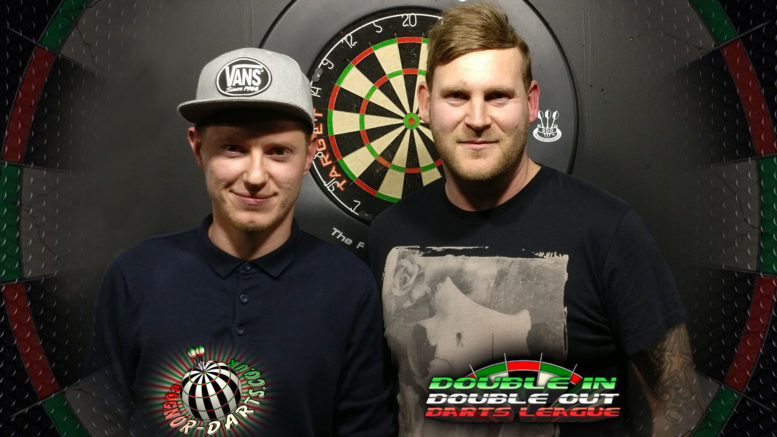 Jack Danahar was crowned champion in the new “Pete May” grand slam knockout from the Double In Double Out Darts League at the Newtown Social Club after defeating Ben Lubbe in the final.

In previous years the league played a team knockout, but many people didn’t like playing 6-a-side, so this year the team knockout was replaced but the grand slam knockout, where every round would be re-drawn. Some 41 players turned up to compete.

Nine preliminary matches took place to take the players down to 32. A few surprise results dumped out some of the expected winners. A 180 came from Rob Misselbrook (Hunston Club) in his win over team mate Hayley Gatford, who managed a 120 in-shot. Rob Palmer managed the highest in-shot of the night with a 160 in his win over Dave Bourne (Friary Arms).

The first round saw a 180 from Ashley Clements (the Hoffs) in his win over team mate Mike Few, and a ton plus out-shot from Stuart Gray (the Hoffs) to sneak the win over league chairman Ian Hackett (Newtown Raiders). The second round saw Gray come up against a 134 in-shot from Rachel Hall (Richmond Arms), but Gray took the win. Round 3 saw Richard Ragless (QE2) take out Gray, Ben Lubbe (Friary Arms) beat Rob Misselbrook (Hunston Club), Andy Cooper (Cabin Cruisers) take the win over Ashley Clements (the Hoffs), and Jack Danahar (QE2) triumph over Ian Kewin (Pier Bar).

The first semi-final saw Lubbe take on Cooper. Cooper won the bull to start first, but he missed his in-shot. Lubbe started with 80 and followed with a 100, 140 and 119, missing the double top with his next throw. But with his opponent nowhere in sight, double top was taken with the first dart. Leg 2 saw Lubbe miss his first in-shot, but manage a 100 in-shot on his second throw. Cooper however missed his in-shot twice which left him trailing behind. A 140 from Lubbe, followed by 114 and then double 10 was all he needed to get to the final.

The second semi-final saw Danahar against Ragless. Ragless started with a 100 in-shot, but Danahar followed with 105. Ragless then hit 140 and 85, but Danahar hit 125 and 87. Danahar missed the bullseye for a 124 out-shot, giving Ragless a chance at 65, but he missed double top. Danahar then missed again, but so did Ragless, giving Danahar chances at double 4 which he took.

The second leg started slower for both players, but both scored two tons on the trot in the same throws. Danahar had the lead though, and had first shot at the finish, but missed. Ragless could only leave a chance, but Danahar didn’t give him that chance as he hit double 14 with the first dart to take the win and the place in the final.

The best-of-5 final saw Lubbe win the bullseye, and start with a 98 in-shot, while Danahar missed the in-shot with his first throw. Lubbe kept in the lead all the way to the double, but Danahar caught up, but with 80 left, Lubbe hit single 20 and double 20, and then double 10 for the leg.

The second leg saw a quick leg from Danahar, taking it to 1-1. Leg 3 saw a 140 from Danahar, but two tons from Lubbe. Danahar missed double 16 for a 106 out-shot, but he managed to finish the leg with his next throw. The 4th leg saw Danahar miss the first in-shot, but the scores were even all the way, but with 67 left, Danahar hit single 17, single 18 and double 16 to take the leg, and the win, becoming the champion.

Darts aces at the double! Kidd and Hackett taste success in Bognor league