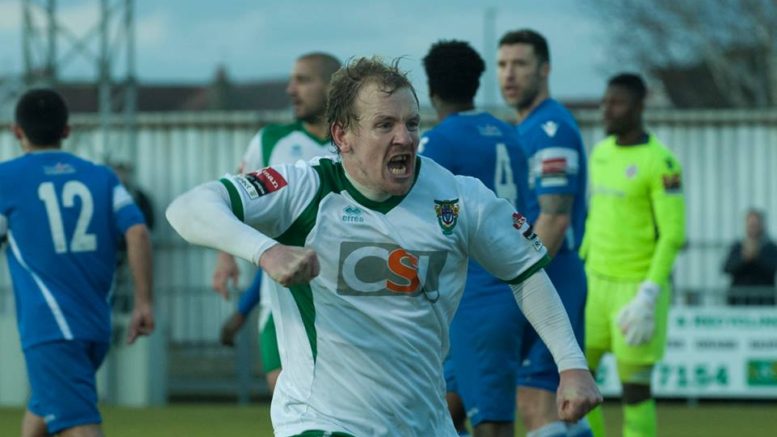 James Fraser, it could be said, doesn’t look like a footballer. Well, certainly not one whose dynamism, energy and, above all, goals, are seemingly spearheading the Bognor Regis Town title dream.

He has a nonchalant air about him. He cuts a tousle-haired figure with a kind of off-centre gait. He is also very unassuming. But, crucially, he also ‘knows where the goal is’, to borrow a much-loved footballing cliche.

Yes, Fraser has every reason, should he feel the need, to shout from the rooftops about his season in a Rocks shirt as Jamie Howell’s men prepare to go again in the Ryman Premier League tomorrow.

He snatched a hat-trick in Saturday’s 4-0 victory over Canvey Island to leave the hosts four points clear at the summit of the top flight, with six games remaining; their leaded stretched by the fact that title rivals Havant & Waterlooville managed only a point with a 0-0 draw at Needham Market.

Fraser has hit 24 goals for the Rocks this season from midfield. It’s an astonishing statistic, and one which Howell believes is acutely significant.

He said: “James is integral to the side, and his goals have obviously helped hugely. Don’t get me wrong, he can be frustrating sometimes in his decision making but I always feel that he will contribute something positive whenever he plays.”

Fraser will bid to add to his tally when Bognor host Leiston on Tuesday night (7.45pm kick-off). Havant are at home to Harrow Borough at the same time.

Howell knows all about Leiston and their threat, having taken his charges to play them only three weeks ago, when the visitors earned a 1-1 draw.

The manager added: “They are good footballing side, and they have a chance of promotion themselves so we know what we are up against.”

Meanwhile, Howell says Gary Charman, who came off with a nasty cut to the head in the win over Canvey, will be fit. One player missing is Charlie Moone; the striker has left Nyewood Lane after a brief spell at the club which saw him score once in seven games.