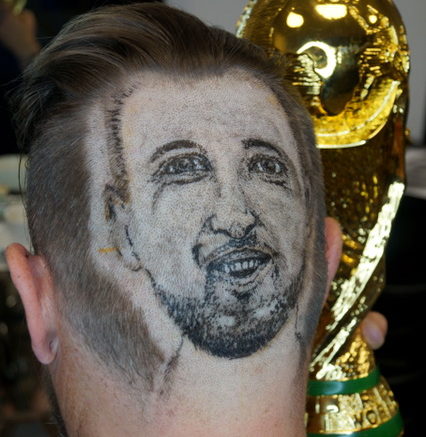 Meet Hairy Kane! Bognor stylist Daren Terry is bristling with pride after getting a Three Lions roar of approval for his back-of-the-net creation!

And talismanic goal-getter Kane’s form in front of goal has inspired artist Daren to shave a likeness of the Tottenham Hotspur striker on to the head of client Kai Ward.

Now fans are approaching Kai to rub his head for luck hoping more good fortune comes England’s way at the tournament in Russia.

Daren, who with wife Kate runs the Lotus Styling hair salon in Aldwick Road, Bognor Regis, has hit the headlines in the past for similar creations of celebrities, including high-profile players such as Wayne Rooney and Theo Walcott.

Liverpool supporter Daren explained: “We dubbed the image ‘Hairy Kane’ and we’re encouraged by the response the image is getting. It took almost five hours to create and we’re replay pleased with the likeness. We’re encouraging people to rub his head to bring the las goods luck.

“The World Cup is proving to be fantastic for England so far and Harry Kane is in red-hot form. So, when Kai asked for his image shaved into the back of the head I was well up for it. I’ve created quite a few similar cuts and applied similar techniques. You get a feel for the work, and to be honest I really enjoy doing it and getting a great reaction to it.

“We’ve been gripped by a kind of World Cup fever in the salon and this just adds to the excitement and fun. We need Harry to bang in a few more goals and give it a real go in the knockout stages.”