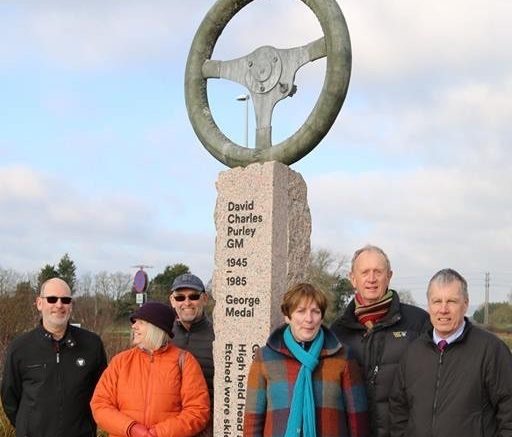 Formula One race hero David Purley, awarded the George Medal for his bravery in a desperate bid to save the life of a stricken driver, has been remembered at a birthday memorial gathering.

Purley, the son of Charlie Purley, who founded Bognor refrigeration company LEC, was tragically killed in an air crash off the seafront aged 40.

On Friday last, 26th January, a tribute was placed on the recently erected sculpture near the new Rolls-Royce logistics building in Bognor, by Bognor Regis Motor Club in remembrance of Purley – on what would have been his 73rd birthday.

The site of the memorial is close to the now redeveloped site of the LEC factory, where the LEC F1 car was built and many other David Purley cars prepared.

Purley, who participated in 11 F1 races over his brief career. But it was his actions during the 1973 Dutch Grand Prix that singled him out as a man of courage.

He tried in vain to help save the life of fellow British driver Roger Williamson, who crashed into the barrier. Williamson was not hurt in the crash, but he was trapped in his blazing car, which had overturned.

As the fire took hold, marshalls seemed helpless and Purley seized a fire extinguisher and tried to extinguish the flames. But it was all in vain and Williamson died of asphyxiation in the eight minutes it took for rescue vehicles to arrive.

Purley’s racing career ended at the 1977 British Grand Prix when a malfunction saw his car to hit a wall at 100 mph. He suffered multiple fractures and duly retired from racing and became more involved in his family business.