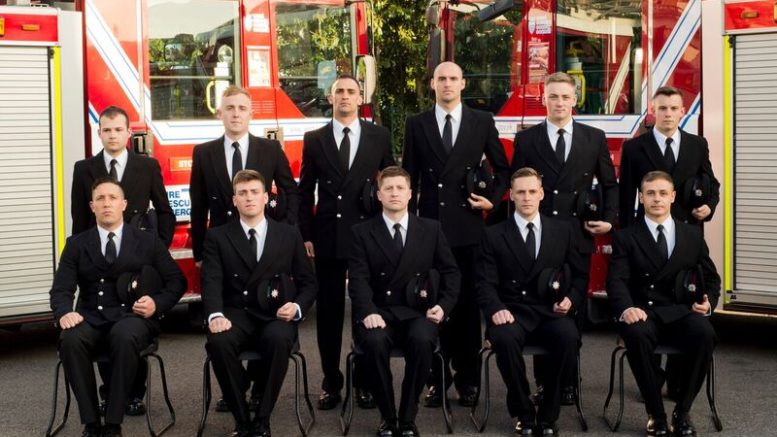 Stuart Williams kept it very much in the family when he was welcomed as a newly qualified firefighter with West Sussex Fire and Rescue Service.

For Stuart, 24, who was already a retained firefighter in Bognor as well as working at Goodwood Aerodrome, has joined his dad Rick and twin brother, Tom, in the service. And his mum Sandra, who is now retired, worked for the service as a 999 operator for nearly 20 years.

New recruit Josh Moss, 25, also from Bognor, will now be based at Worthing. Before joining WSFRS he was a sports development coordinator. They, along with Ross Deck, 34 – a former Royal Marine commando who will now be based at Bognor – joined eight other new full-time firefighters yesterday at the successful completion of their intensive 14-week residential training course.

They performed fire and rescue drills at a pass out ceremony attended by their family, friends and dignitaries. Each recruit beat off competition from more than 700 applicants and was presented with a certificate to mark the completion of their course.

WSFRS Chief Fire Officer Sean Ruth, addressing the new recruits and their families, said: “You should be really proud of yourselves for everything you have achieved over the last 14 weeks.

“This is the beginning of your journey as firefighters. It is a journey that will be interesting, exciting and varied. Your experiences as a firefighter will never leave you. Never forget why you joined – to help and support people and to keep communities safer, stronger and more resilient. It is the best job in the world – welcome to the fire and rescue service family.”

The training is the second recent course to be carried out in-house within West Sussex and was largely based at a residential centre at Horley Fire Station, which trained new wholetime recruits for the first time last year.

The recruits learned all of the skills they need to begin their careers as firefighters, including core skills, technical and water rescue and breathing apparatus training.

During their training they took on an ambitious ladder climb at Gatwick Airport, scaling 6,070 metres, higher than Mount Kilimanjaro, in just two hours to raise more than £1,000 for The Fire Fighters Charity. They now enter the development phase of their careers on stations across West Sussex.