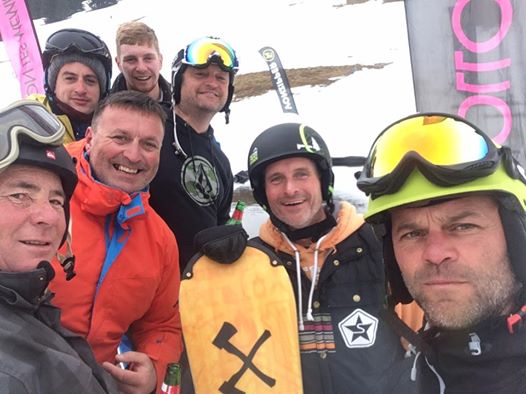 Ski whizz, that was cold! That could well have been the reaction of Bognor Regis ski enthusiast Gary Pugh when an attempt to pull off a cool stunt on the slopes left him dunked in freezing water.

And luckily for us, pal Mark Ward was on hand to record joker Gary’s attempt and hilarious consequences as he tried to aquaplane across a body of water on a ski holiday in France.

Gary and Mark were part of a group of friends from Bognor who headed for a ski break in Thollon – but they could never have expected to capture such a comical moment as Gary lost it at the edge of the water and plunged into the water.

Yet Gary, seen in our picture in an orange ski jacket, seemed to take it well, even if he probably needed a warm shower, a hot drink and a change of clothes afterwards.

After the video of the madcap mishap was posted on Facebook, Gary admitted: “I think the only chance I’ve got crossing this water is If it’s frozen!”

Mark, pictured far right with yellow helmet, said of the clip: “Gary never let’s us down.”

And Janet Cattermole responded, as did many others. She said: “Made my day Gary, thank you!”